After many years of success in Scandinavian countries Swedish Glace, the delicious and smooth soya based ice cream, is introduced in the Dutch supermarkets now. Hajok Design developed the brand new packaging for the dairy-free products.

Finally, winter is over and spring and ice creams are coming! The interest in plant-based ice cream products is increasing and there is more attention for a balanced diet with dairy free snacks. The introduction of Swedish Glace offers consumers a delicious ice cream that is just as good as normal milk-based ice cream. 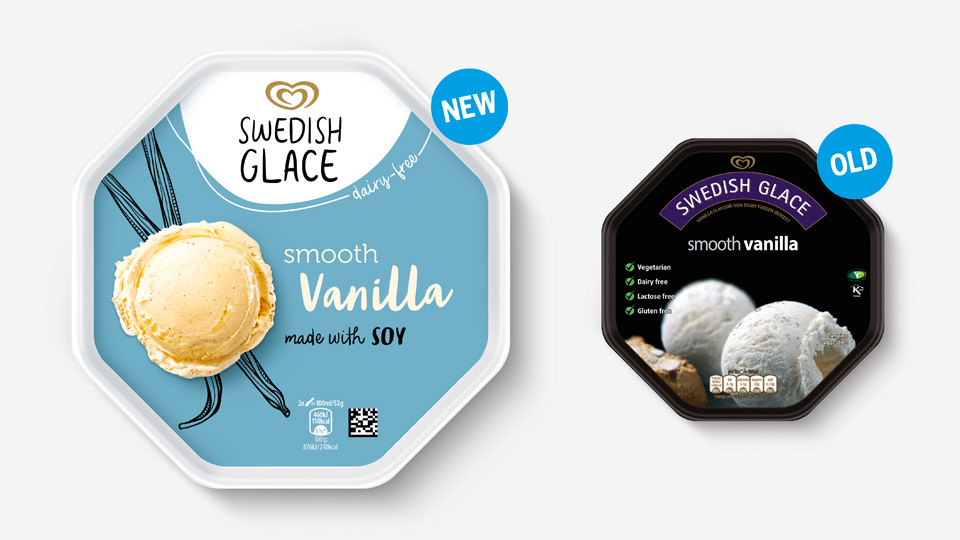 A smooth & delightful packaging
Important in the packaging design development was that the look should fit a modern contemporary lifestyle. The need for dairy free ice cream is increasing, not only amongst vegetarians and vegans, but also consumers who love to eat soya based ice cream as they're just being conscious about what they eat. The packaging, inspired by ‘Swedish Design’, is very refreshing and has its own style. The scoop on the pack represents the smooth, fresh texture of the ice cream. 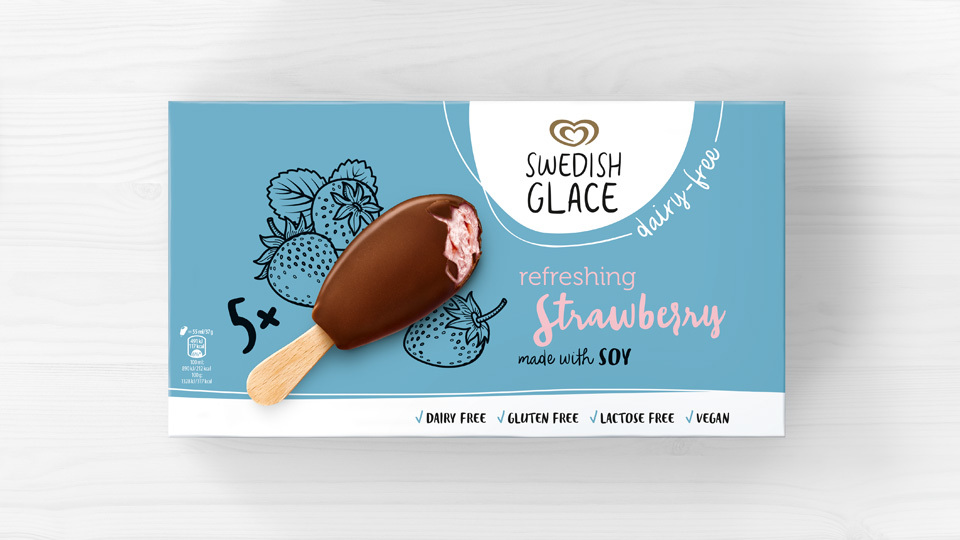 © HAJOK Design: style on a stick

Lian van Meerendonk from Hajok: “The consumer group that buys dairy-free ice cream becomes broader. More and more people are looking for an alternative for milk-based products, without the necessity of them being marked as ‘vegan’. They choose plant-based products consciously, but it is not mandatory for them. These consumers we had in mind whilst developing the design.”

Responsible for the concept and design of the new brand identity of Swedish Glace was the Hajok Design Team headed by Creative Director Ina Graeven and Senior Design Consultant Lian van Meerendonk.

Swedish Glace
In 1998 the founders of Swedish Glace discovered the ultimate recipe for ice cream based on soya, that is as tasty as normal milk-based ice cream. The Swedish company Carlshamn started to produce it and this way they brought this unique ice cream to the market, under the brand name Tofuline. Five years later, the company was bought by the Finnish company called Ingman.

Unilever took over Ingman in 2011. When it turned out that the soya ice cream had a lot of potential outside of the Scandivian countries, it was launched in 2013 in the UK and Ireland. Tofuline was rebranded to Swedish Glace. Last year the ice cream had been introduced in Italy and for 2016 it will be launched in the rest of Europe.

To mark the agency's 25th anniversary, HAJOK is presenting the #stillthirsty gin, a special project that combines almost all the expertise of the brand agency.

In the second edition of our video blog, Madeleine Lindner talks about QR codes and digital shelf impact.

The Hamburg design agency has been awarded the international prize for branding for the Appel Feinkost brand relaunch.

In this interview, Klaus P. Hajok talks about the beginnings of HAJOK, the development of the agency and how the industry has changed.

In the first edition of our video blog, Madeleine Lindner talks about sustainability and packaging design.

Brand and design agency HAJOK is strengthening its management board with the addition of Madeleine Lindner, who has also been promoted to managing director.

Responsibility, connectivity and products with added value are topics that currently inspire our creative director.

HAJOK has brought senior designer Clara Schöbel and design director Serge Pierre-Kaiser on board, expanding the creative team in the daily business department.

Modern typography, a clear structure and, above all, particularly appetisingly staged food images: HAJOK has created a modern design for the Appel portfolio.

Our team of consultants knows how to manage brands – years of experience and a great deal of know-how – successfully providing our customers with sound advice!

In our interview, Madeleine Weiss and Klaus P. Hajok reveal how they remain on track to success even in difficult times.

Our design development department creates many great ideas every day - find out more in the interview with Jannika Plaas, Lisa Köhler and Dennis Dominguez.

HAJOK has combined traditional and modern design elements to create the spring edition for Schwartau.

Clear, contemporary and simply yummy – this is the new look for Cremissimo at POS.

For the innovation product CORNY Ganze Nuss, a premium bar with whole nuts, HAJOK developed a packaging that features a reduced and high-quality look.

A triple win for HAJOK Design at the German Design Awards. The Hamburg-based brand agency has won three of the prestigious awards in the packaging category.

The brand and design agency is pleased to announce the addition of senior designer Julija Zemite and design director Dennis Dominguez.

The Pentawards jury has honoured the packaging design for the three superfood powders from PENNY's organic private label Naturgut with an award.

The brand agency has been honored with the coveted award for the packaging design of the insect burgers from Bold Foods.

Even the photos for some of our packaging designs are done in-house. Here we present our studio along with our photographer Kim Schönert!

8 creative people, passionate and wholeheartedly committed to their work, each with a very precise eye for detail are the “test centre” for our design work.

HAJOK Design took on the complete brand development and the packaging design for the start-up company.

HAJOK creates a reduced aesthetic packaging design for the special edition that perfectly combines the Ricola brand world and the Hamburg Elbphilharmonie.

After the successful packaging design relaunch of the entire food portfolio, HAJOK Design has now created the new tea range from the organic company.

Tartex has been rooted in organic food retail for many decades. By repositioning the brand HAJOK assisted Tartex in establishing itself in the drugstore market.

In the magazine Verpackungsrundschau Jannika Plaas and Peggy Ruge give some insights about their work for Tartex and how to strengthen brands for the future.

With its film “Everywhere” HAJOK Design has convinced the jury of the "The Best Agency 2018" award and is one of 20 agencies on the shortlist.

The article in the magazine new business traces the journey from the start of HAJOK Design to the current line-up as well as presenting current projects.

Our Creative Director Madeleine Weiss on the design development of the new Shower Tonics and the special requirements for the design of cosmetic products.

You can now get the taste of Baileys straight from the freezer. Besides packaging and naming, HAJOK developed the sales story and the design of sales materials.

The organic food brand Allos stands for innovation, care and sustainability. Our strategist Susan Khallaf advises Allos and reports on the successful relaunch.

Nordic, fresh and yummy – is how LÄTTA, the Swedish lifestyle brand now presents itself with its new design.

The founder and managing director of HAJOK Design about the success of the agency and the changing industry.

Skyr milk products in the form of desserts and drinks are very trendy. Now Unilever has brought another product innovation to the market: LÄTTA mit Skyr.

The glucose brand intact kicks off the summer with a new and very expressive design.

Greenery - Pantone colour of the year // Protein is the topic // Vegan ice cream - new brand identity // Trade fares - What was there to see? // HAJOK 20 years

“I’m going to be a graphic designer!” From an early age, Klaus P. Hajok knew exactly what he wanted to be when he grew up.

With its new innovation, Becel introduces a range of trendy spreads that is launched in the Netherland first, and will be rolled out to other European markets.

In keeping with the motto “Glamour meets Art”, SCA has launched a new special edition of the traditional brand feh on the Austrian market.

Emmi initially brings a yoghurt drink with a higher protein content to market by launching the innovative Emmi protein drink.